Rajgundha | The heart of Northern Valleys

Rajgundha valley is regarded as the heart of valleys in Northern India. Rajgundha Valley is popular for the calm and pleasant experiences it provides.

Planning to enjoy trekking at an offbeat location and want to experience the local Pahari culture and diversity in a peaceful place? Then Rajgundha Valley is one of the best options for you. Located in the Kangra district of Himachal Pradesh, this beautiful destination provides amazing life remembering trekking and camping experiences. The Rajgundha valley is regarded as the heart of valleys in Northern India. This pleasant valley enriches you with a lot of positive vibes and provides you a mind-blowing view of the Dhauladhar Mountain ranges. Many people prefer trekking in the valley because of its scenic natural beauty and sky-touching hills.

Here you can enjoy a clear view of countless stars during the night which is a quite pleasing experience. It provides decent competition to other trekking sites such as Kasol, Triund, Kheerganga, Manali, and many more. Here one can experience the beauty of nature, the calm and pleasant climate, beautiful view of nature, wildlife, local culture, and traditions. The valley is miles far and miles away from civilization. Rajgundha has no connectivity to roads and there is no source of pollution here. After spending a couple of days here, one can feel the difference in his/her mind and body. 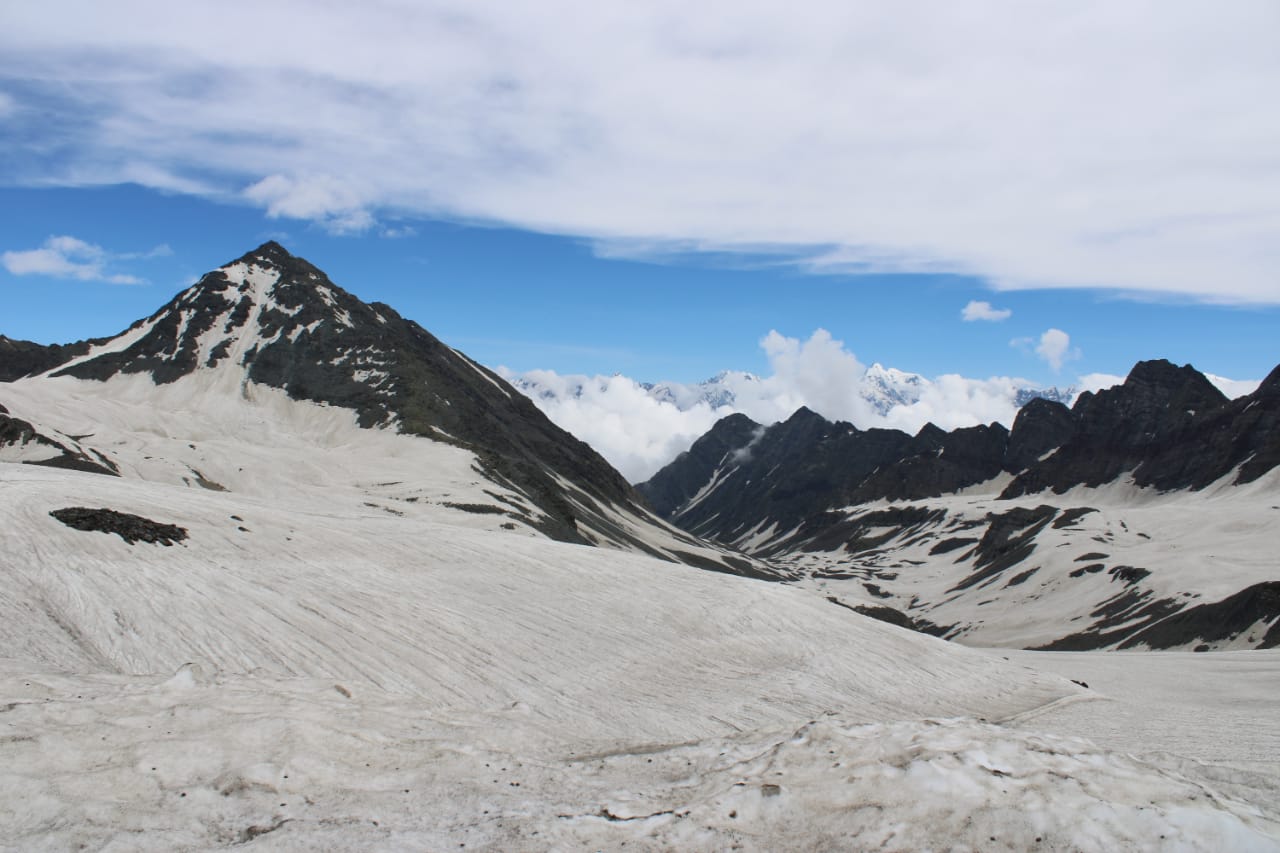 A Glimpse of the Valley :

Situated in the middle of the Dhauladhar mountain ranges, it is one of the most popular trekking spots and is full of positive vibes and energy. Rajgundha Valley is located in the Kangra district of Himachal Pradesh. The top of the hill is situated at a height of 2400 meters above sea level. There are no roads connecting to Rajgundha, the only way to reach here is via trekking. Primarily, Rajgundha and Kukargundha are twin villages that provide a decent view of the environment. Rajgundha is a combination of both Upper and Lower rajgundha. The upper-side of the village is called the Rajgundha(main village) and lower-side(Kukkar-Gundha).

The Upper-Rajgundha consists of a total of 30 houses and the Lower-Rajgundha consists of 25 houses. These two are well connected with another attractive village which can be explored via trekking. The only way to get here is via trekking. The Uhl river passes through the Rajgundha which originates from the top of the Thamsar Pass. The valley is full of flora and fauna. It is home to many bird species and wildlife. One can observe a variety of birds and trees here. Earlier, the valley was under the wildlife sanctuary but now the village area is converted into agricultural land. The houses here are built in the traditional way using mud and stone.

Between the upper and lower Rajgundha, there is a Government-owned Potato farm. The Potatoes grown here are 100% organic, prepared with the help of the natural animal humus. The cultivation season of the potatoes here in October. Below the potato farm, there is a small area filled with Devdar trees. This group of Devdar trees adds a strong beauty factor to the Rajgundha. There is only one shop in the Rajgundha Valley owned by Mr. Thakur Das. The shop consists of basic grocery items and snacks. A few seasonal shops open here serving tea and other snacks and stops operating during the harsh winter season.

The population of Rajgundha is primarily local Pahari people. The traditional dress of men here is Pahari topi(cap) and Pahari Coat whereas the women wear Pahari Blanket and Pahari Dhattu( A type of Dupatta or Chuni designed in the traditional Himachali fashion). The people here live a quiet simple life and the primary source of people here is agriculture. They sell their produce in the market to earn some money and use the same produce for their daily meals. Here, kidney bean(Rajma), Cabbage, and Potato crops are grown in abundance. People here live in houses which are built-in old traditional way using stone and mud which is a sort of fascination to the visitors.

Summer Season: The valley is definitely a good place and experiences a cool temperature throughout the whole year. It is a great place for those who want to escape the scorching heat during summer. The summer season here starts from March to June. You can experience cool and calm air during the season and can wander between the green fields which pleasures your mind and body. You can also enjoy your day on the riverbank of the Uhl River. Several pulses and vegetable crops are planted during the season. You can experience nature in its purest form during this season. The plantation of Cabbage, Cauliflower, Rajma, and other crops starts from mid-April. The temperature rises here during summer days. You could wear half-sized clothes during the day but it is advisable to carry some warm clothes as the temperature may decrease during the night and early mornings. During this season, whenever it rains, it gets accompanied by hailstones. There are several other activities which you can enjoy such as Paragliding in Bir Billing, Fishing at Barot, Trek to Hanumangarh and Thamsar Pass and many more.

Winter Season: The winter season starts here in October and ends in February. During the winter season, the climate here become coldest through the year. The period during the winter season is great to experience Rajgundha. The whole valley is covered with snow and the weather becomes pleasant. The temperature here during the winter season gets lowered down, but not as much that you cannot tolerate. The months of January and February get a number of snowfalls and the valley gets completely covered by the snow up to 8-10 inches. Warm clothes and snowshoes are compulsory in this winter season. You can enjoy the snow trek here which is a mind-blowing experience. But if the density of snow is high, then the trekking activity gets postponed. There are no crops and vegetables grown in this season and the entire population here along with their cattle migrate to other lower places such as Bir, Sansal, and Baijnath.

The Rajgundha Valley is a great place for adventure enthusiasts. The place is not only limited to adventure lovers, but this place has almost everything for different people. The place offers a quite different type of experience to different people. The place is close to a number of other great travel destinations such as Barot, Bir Billing, Hanumangarh, and a number of other trekking trails. The reasons to visit such a place can't be described in only a few words. But we have described some of the major characteristics of the place below:

Beautiful Scenery: The whole Rajgundha is a beautiful place to explore. The atmosphere and the positive vibes here are the next levels. The valley remains cold and pleasant throughout the year. The valley is far away from the pollution and the day-to-day worries and stress. The serenity and calm that the valley offers makes the valley ideal for meditation and yogic activities. Rajgundha Valley is an awesome place for people who are visiting for the purpose of self-introspection and want a gap from their busy stressful routine. There are a number of attractive sites you can visit from the Rajgundha, such as a small lake which is at a distance of 1.5 hours from Rajdundha and an elegant waterfall located 12 km away in Jodhi which attract the attention of the tourists.

Trekking Experience: The Rajgundha Valley is a great place for trek lovers. The valley is close to a number of other famous trekking trails such as Nohru Pass, Thamsar Pass, Jalsu Pass, Chainna Pass, and Sari Pass. The place is in the middle of all the famous trekking passes and provides a spectacular view of the surrounding passes. From the lower-Rajgundha, one can clearly see the Thamsar Pass(one of the best trekking trails for Professional trekkers). The route to Thamsar from Kukkargundha is as Plachak - Joddhi - Penhyuartu - Thamsar Pass Top. 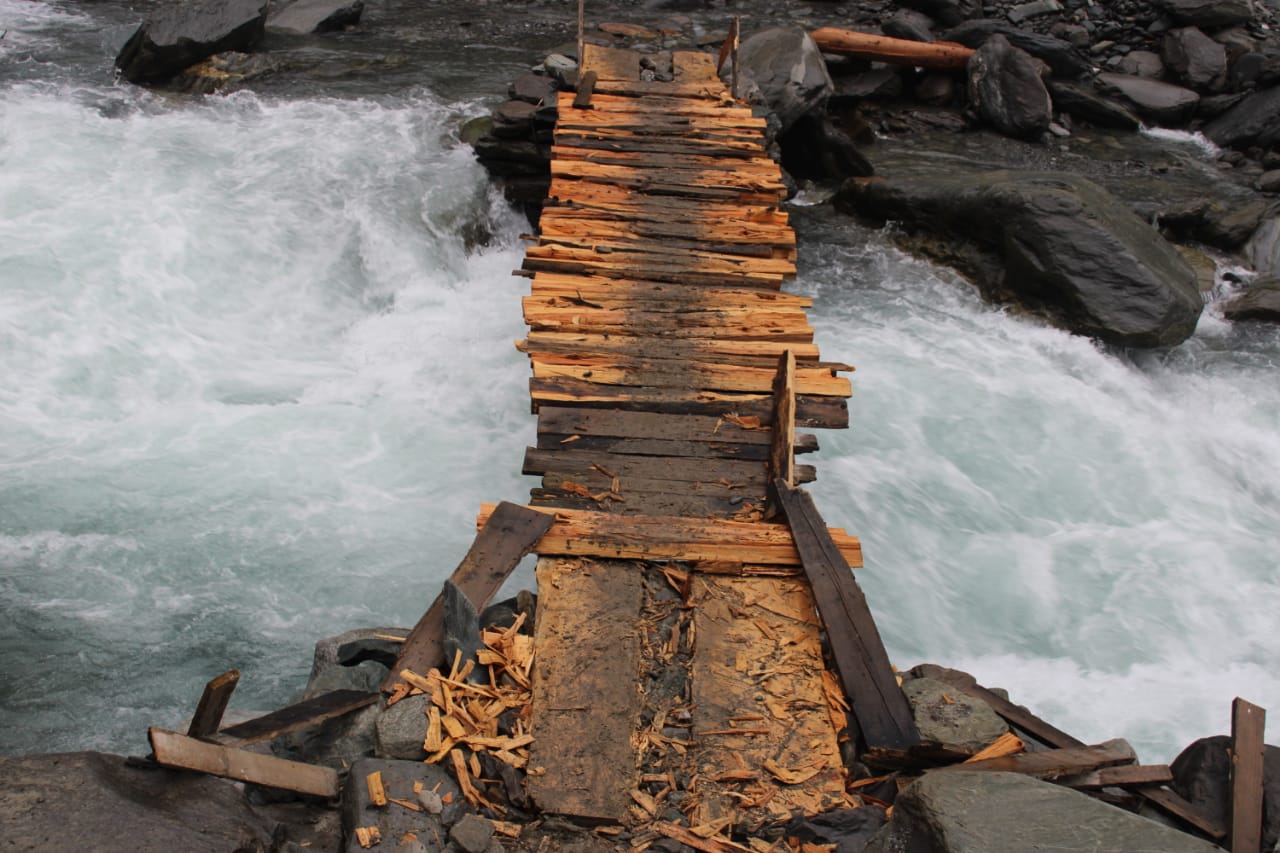 The trek experience to Rajgundha is pleasant and worth it. The Rajgundha Trek from Billing starts as Billing - Chenna Pass - Darot - Kardhar - Rajgundha - Kukkargundha. Within this whole trek route, there is only one small tea shop located at Chenna Pass. The shop is owned by the Chacha Mansha Ram serving Maggi, Tea, and other snacks here for the last 25 years. The Rajgundha trek from the Billing takes about 5 - 5.5 hours. The other Barot -Rajgundha Trek route is nice too.

Camping Experience: As described earlier, Rajgundha is a great place for the camping experience. If one wants to satisfy the wanderlust in him, then the place is a must to visit. The place offers a tranquil environment for travelers with a great essence of natural beauty. The camping experience in such a place is the next level. The feeling of camping within the middle of the mountain ranges, and enjoying the night skies full of stars is awesome. The organic food along with the bonfire and the calmness of the place adds an extra touch to the camping experience. Rajgundha maintains a pleasant environment throughout the year which is great for people wanting to explore nature to its fullest far from any disturbances.

Organic Farming: If you want to enjoy the pleasure of using organic things and products, then Rajgundha is the best place for you. The other reason for the popularity of  this valley is organic farming. The crops and vegetables are grown here with the help of organic humus rather than pesticides and fertilizers. Here major items used within the kitchen are 100% organic. The vegetables and crops grown here are supplied to the other parts of the Himachal and Punjab. If you visit the place, then it is recommended to taste the food here as it will give you a unique taste. The 100% natural and organic items enrich the food experience.

There are no roads connecting Rajgundha Valley to other villages. The only way to reach here is via trekking. To reach Rajgundha you have to visit either Billing or Barot first to start trekking. Rajgundha is 14 km away from the Billing and 7 km from Barot. Both the routes are surrounded by dense forests. Between the trek routes, one can find a wide variety of trees and plants. The route for the trekking is:
a)Billing - Rajgundha
b)Barot - Rajgundha
The Billing - Rajgundha trek route covers a distance of around 14 km and the second one i.e, Barot - Rajgundha covers a distance of 7 km. The information on to reach either Barot or Billing is described below:

1)How to reach Bir Billing: To visit Billing, you have to first reach Bir. Billing is about 14 km from Bir. After reaching Bir, you can directly hire a cab to reach Billing which will take around 45-60 minutes. This will cost you around 500-1000 INR. However, if you are heading up in your own car, then you can simply park it on the Billing site. You will be charged for parking there but it is mostly safe. Now finally from Billing, you can head over to the Rajgundha which is 14 km from the Billing. In order to find more information on how to reach Bir-Billing, then you can read our descriptive article on Bir.

There is no single ATM in Rajgundha. You have to carry enough cash while trekking here as there are only a few shops here accepting only cash. The nearest ATM to Rajgundha is at Multhan located in Barot which is a 13km trek from here, and the other one is 30 km far away in Bir. So, carry a sufficient amount of cash with you before heading towards Rajgundha.

This is the most complete article on Spiti Valley on the Internet. Everything in this article covers…

Bir Billing Paragliding | Things You Need to Know in 2021